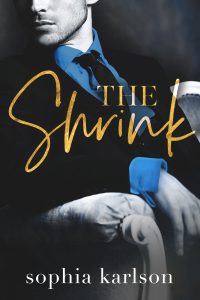 Apparently he’s the shrink who will cure her.

Stacey Sinclair’s mother died in a gruesome car accident six years ago, and now everybody thinks she is finally losing it. Surely a few crazy actions on her part don’t justify her seeing a shrink for months on end?
For a psychologist, Dr Ivo Linder is too decent, too caring, and too handsome to get a glimpse of what really goes on in her head. Stacey’s unforeseen feelings towards him make her retaliate — she taunts him, never expecting to fall with him into forbidden lust.
As their attraction intensifies, the old adage stands: it doesn’t matter, as long as nobody finds out. But someone always finds out and when they do, will Stacey and Ivo risk everything to give their love a chance?

Stacey shrugged. “I’m good.”
In my opinion, you’ve never been worse. Ivo stared at her, but she met his gaze head-on. “Where’s your car?”
“Not here.” She looked as if she wouldn’t answer him, but capitulated. “I took an Uber here.”
And from this seedy joint she was going to take a taxi home? Or hitch a ride with her hook-up, spend the night with some dick, only to flounder home at some point tomorrow morning? Hung over, banged by some stranger, and then attempt her exam? No wonder she kept on flunking. He tried to keep a straight face, but in this environment, with her here, barely dressed, every control centre in his brain was having a breakdown. “I’ll take you home.”
At this, she laughed. “Dr Linder, I don’t think that’s a good idea.”
“And why’s that?”
She was spelling it out for him, all right. But he could be bloody stubborn and thick-headed too.        “My type…you’re so not ready for me.” She blinked at him, flirting with her eyelashes.
Every tendon in his body tightened, every muscle pulled towards his centre where his dick rose without invitation. Who mentioned ready?
He dropped his gaze, only to see chills sprouting on her arms and over her exposed chest; her fingers folded over her arms, turning white because of the cold.
He swallowed, unable to respond verbally without melting into her and holding her close, mouth against mouth, lips teasing. With one step, he closed the gap between them and dropped his jacket over her shoulders.
She shuddered at the gentle gesture. “I don’t need you, Doctor. And you don’t need me blazing your life into the ground.”
He was in her face now, their bodies sinfully close, his hands still on his jacket but resting on her shoulders. “I’m exactly what you need.”
She chuckled. “What about never screwing me? Anywhere?”
“Stacey,” he sighed, resisting to urge to drop his forehead to hers. “I’m taking you home.”
“And then?”
His control slipped. The day was too long. The past three hours too intense. “Then, over the next few weeks, I’m going to take a bottle of paint stripper and brush you down. Layer by layer, until we find the real you and you stop pretending. So, cut it out.” The words came out in a way he should never talk to a patient. Being human sometimes interferes with the job.

And now that I've got to upgrade Microsoft and con

DAY 9 of #NewYearNewWIp is an Inspirational Quote.

Awkward 🙈 DAY 7 of the #NewYearNewWip challeng