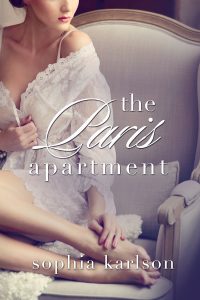 She’s been in love with him all her life.
His little sister’s best friend is all grown up.
Will a chance reunion lead them to true love?
As an artist, Paris has always been Mila’s dream destination. To finally be free of her family and the restraints they put on her only adds to the pleasure of being in Paris on her own. Except that James, her best friend’s older brother, is in Paris too, in the same apartment, and claims his side of the only bed.
A one-night stand only leads to more temptation, but James has a secret. A secret that can kill their budding relationship. Can James steer clear and deserve Mila’s love without revealing it all?

If you like raw emotions, sizzling love scenes, and indulging in all things French, this book will take you there. The Paris Apartment is the first book in the Love Nest Series by award-winning contemporary romance writer, Sophia Karlson. Pick up The Paris Apartment today for a decadent trip to the City of Love.

“The Paris Apartment births some of the hottest, seductive sex and will keep you begging for more. Sure their path is riddled with half truths and secrets but love may or may not prevail. For romance lovers this is a must read.”  Kazza’s Book Blogs and Reviews

James appeared in the entrance hall and her heart skipped a beat at seeing him. He looked ruffled, his tie loose around his neck and his hair disheveled as if he’d dragged his fingers through it too many times.

She sat straighter, brushing the tendrils of hair from her face. “Hi.”

He dropped his laptop bag at the entrance and tossed his keys into the bowl at the front door. “Hi.” He closed in on her, and with each step he took, her heartbeat edged up a notch. By the time he stood at her feet and she had to lean back to see his face, her pulse was racing.

“Rough day at the office?” she breathed, their earlier sexting running on repeat in her mind.

“You could say that.”

She looked down so that he couldn’t see her grin, but her eyes came level with his groin and she had to blink. There was a rustle of fabric and with a sigh, he dropped his jacket to the floor. She looked up to see him tugging at his tie. He unknotted it slowly, intentionally, and her stomach did a slow turn at seeing his fingers, the memory of what he’d done to her with them that morning. The tie landed on top of his jacket.

“We have unfinished business.” He stared down at her as he started to roll up his sleeves.

She shifted in the chair, sudden heat crashing through her at the look in his eyes. Yes, we do.

“Your business dinner?” she whispered. She was in it deep this time.

He took his time to finish rolling up his sleeves. Every cell in her beat in a frantic tick-tock. She had no idea what he was getting up to, but within her, there was an unruly reawakening of this morning’s unfulfilled desire.

“Cancelled.” He placed his hands on the armrests and bent over her. She wanted to lean back, to get away from his gaze that didn’t break with hers, but she was trapped. His lips were inches from hers, and hers felt dry in anticipation that he might kiss her.

She ran her tongue across her lips, her breathing stalling as he bent over to run his lips across her temple. At any moment he could slip lower, to her lips.

But instead of searching for her mouth, he grazed her ear. “But that’s a good thing because now I can take care of other… issues.”

She closed her eyes at the sweet brush of his lips on her skin. “What issues?”

“Someone called me a pussy tease.” He nibbled her earlobe and she dropped her head to the side to give him access to her neck. “What does that even mean, Mila?”

Buy from The Wild Rose Press

Buy from Barnes and Noble

Buy from KOBO US

Receive a fresh update from Sophia Karlson every month.